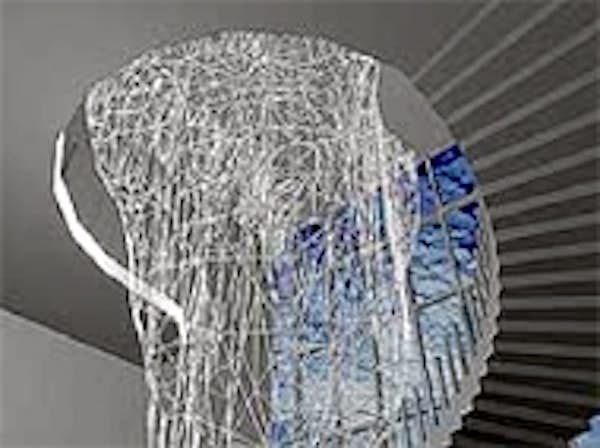 Born in Madrid, Spain, in 1961, Iñigo Manglano-Ovalle was raised in Bogotá, Colombia, and Chicago, where he currently lives, teaches, and maintains a studio.  Much of his early work was centered on community, concerned largely with issues of migration and immigration, ethnicity and place. Manglano-Ovalle is engaged in a process of understanding how certain extraordinary forces and systems—man-made and natural—are always and already in the process of remaking the world.  Over the course of the last decade, he has worked in a wide range of media—activist-inspired public art, sculpture, film, sound, and photography—all of which fuse the politics of contemporary urban culture with poetic meditations on aesthetics, history, and identity.

Today, the artist continues to embrace the interdisciplinary. Working in collaboration with geneticists, biotech researchers, legal consultants, medical ethicists, architects, composers, writers, historians, and others, Manglano-Ovalle forges a creative enterprise unrivaled among his peers in its scope and complexity. Issues pertaining to personal and collective spaces, the negotiation of borders, and social injustice—which always have been central to his project—are still present.

Now, however, the artist treats these concerns in a more abstract fashion, against a larger, metaphorical landscape of passages— through time, space, atmosphere, and geography, with their attendant cultures of observation and documentation.  Most pointedly, weather and climate—super cell storm clouds, for example—have become, for the artist, new vehicles for examining patterns of mighty migrations that move where they will without respect for borders or boundaries. “What I want to represent,” the artist declares, “is how the world represents itself to us.”

For the Art Institute of Chicago’s Focus exhibition, Manglano-Ovalle has constructed a monumentally scaled (two-stories high) model of an actual iceberg formation recorded this summer off the coast of Newfoundland and premiered a new digital video.

The Art Institute of Chicago has received Lannan support for the exhibition “Focus: Iñigo Manglano-Ovalle” which will be on view February 17-May 14, 2005.