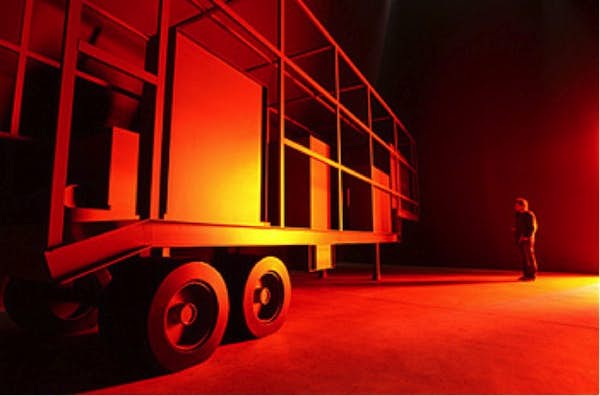 Iñigo Manglano-Ovalle’s Phantom Truck, within the exhibition MO/RE/AL (More Real?). Phantom Truck is a full-scale reproduction of a mobile truck trailer, ostensibly containing a biological weapons lab. The piece is inspired by former Secretary of State Colin Powell’s description of such a truck, which he used as justification for the invasion of Iraq in 2003. Manglano-Ovalle, a former MacArthur Fellow, constructed the truck by combining renderings used by Colin Powell and photographs of actual trucks found in Iraq after the invasion. More Real? Art in the Age of Truthiness is presented by the Minneapolis Institute of Arts and SITE Santa Fe and premiered in Santa Fe on July 8, 2012. It will then be presented in Minneapolis in 2013.