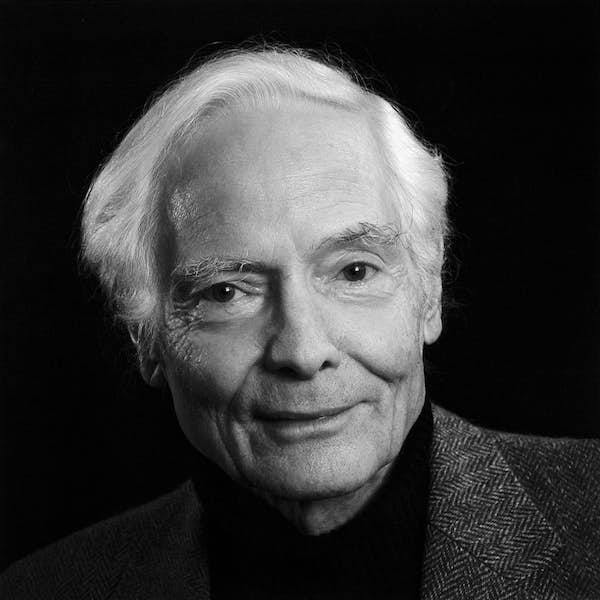 W.S. Merwin (1927-2019) was an American poet, translator, and environmental activist. The son of a Presbyterian minister, for whom he began writing hymns at the age of five, Merwin went to Europe as a young man and developed a love of languages that led to work as a literary translator. He served as U.S. Poet Laureate from 2010 to 2011.

Merwin’s first book of poems, A Mask for Janus, was selected by W.H. Auden for the Yale Series of Younger Poets in 1952. Numerous poetry collections followed as well as books of essays. He was a notable translator of poetry and drama, primarily from the French and Spanish, and also the classics, with nearly twenty titles published including a much-praised translation of Dante’s Purgatorio, and more recently, Sir Gawain and the Green Knight.

Over the years, his poetic voice moved from the more formal and medieval to a more distinctly American voice. W.S. Merwin’s later poetry was perhaps his most personal, arising from his deeply held anti-imperialist, pacifist, and environmentalist beliefs. He published numerous books that explored the relationship between language and landscape, including The Folding Cliffs, The River Sound, and Flower & Hand. His collection Migration: Selected Poems 1951-2001 won the National Book Award, and The Shadow of Sirius garnered him his second Pulitzer Prize.

Edward Hirsch wrote, “Merwin is our strongest poet of silence and doubt, vacancy and absence, deprival and dispossession. He is a master of erasures and negations, a visionary of discomfort and reproof, the Samuel Beckett of postwar American poetry.”

His distinctly American voice was acknowledged with many honors including two Pulitzer Prizes, the Tanning Prize, The Bollinger Prize, a Lannan Lifetime Achievement Award, the Ruth Lilly Prize for Poetry, and the PEN Translation Prize.

He lived in Haiku, Hawaii where he had created a forest of over 800 species of palm that was turned into a nature conservancy.

From the collection The Shadow of Sirius (2008), which won the Pulitzer Prize for Poetry in 2009.