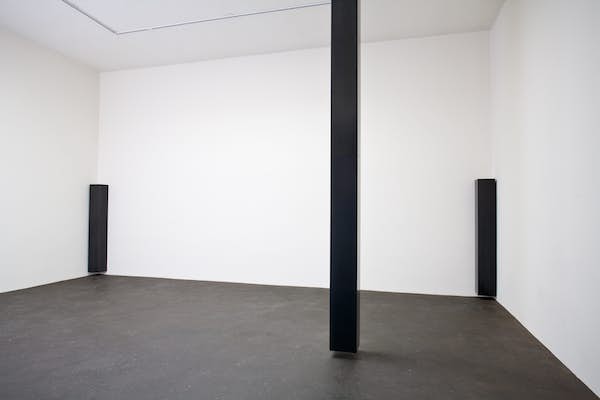 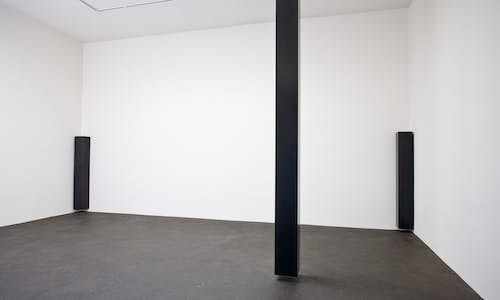 The project represents a challenging increase in scale and scope for York. Two six-foot high graphite forms will hang in the corners of the space and one stacked fourteen-foot hanging column will float in the gallery, placed slightly off-center. The 800 pound hanging column will float only a few inches above the floor, suspended from a beam above the gallery. The surfaces of the graphite forms are richly modulated and highly polished. Additional drawings and sculpture by York, including Tilted Column (2008) will also be shown at the Lannan gallery. A catalogue will be published in conjunction with the exhibition with essays by Lucy Lippard and Diane Karp.

3 Columns is inspired by another piece in the Lannan collection, Dan Flavin’s, the nominal three (to William of Ockham), 1963, which is comprised of three vertical fluorescent light fixtures. Ockham, a 14th century theologian, wrote that “entities should not be multiplied unnecessarily.” York’s study of the distillation of these multiple forms and their relationship to space echoes Ockham’s edict. Noting the relationship of York’s sculpture to the work of Flavin and his contemporaries, Martha Hughes wrote in THE Magazine that York’s work “. . . represents the continuing evolution of Minimalism among a younger generation of American artists.”

York’s previous installations include Center of Gravity (2001-present), a series of site-specific immersive works consisting of rooms completely covered in polished graphite with graphite forms placed on the floor. In describing York’s earlier work in Art in America, Sarah S. King wrote that her “striking body of work and systematic methods . . . adroitly provoke tensions between space and form.” York has also created site sensitive works in galleries; installing graphite sculpture and drawings to create subtle tensions between the sculpted and drawn forms and the physical, architectural space.

In writing about York’s work in the July 2008 issue of Sculpture, Jan Riley wrote, “Nothing is left to chance and nothing is ignored. Her pieces are made powerful by the control she exercises over them. In viewing her work it is clear that you are in the presence of something to be taken seriously . . . One of York’s graphite cubes mounted to the wall (even one as small as 4 x 4 inches), has a preternatural pull, almost as though it has a specific gravity all its own.”

York’s austere and contemplative graphite objects are set within the gallery to induce a formal and perceptual experience for the viewer. The specificity of each of the artist’s installations creates a numinous state of quiet and resonant beauty.

Susan York’s work is represented in the collections of the Lannan Foundation, Santa Fe, New Mexico; the Panza Collection, Lugano, Switzerland; and the Stedelijk Museum, the Netherlands. She is a 2007 recipient of a Joan Mitchell fellowship for Painters and Sculptors.