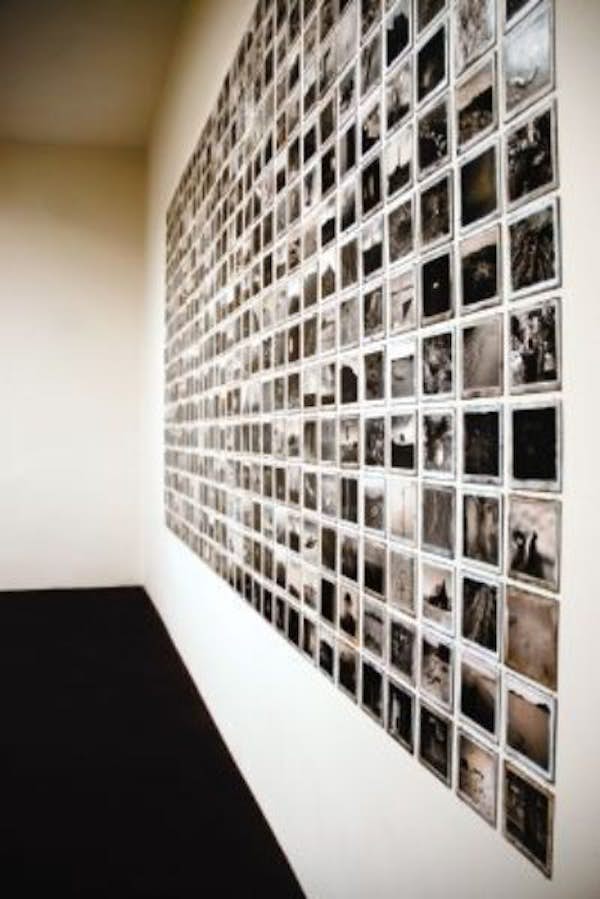 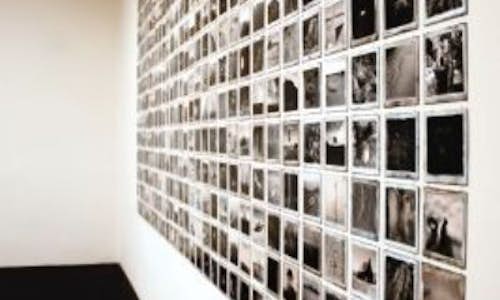 The exhibition features Berman’s seminal work, 480 Plates, an ode to the desert that lies along the U.S. and Mexico border. Each of the 480 images is a fine silver print mounted on a 5 1/2 inch square of aluminum, cut and filed by hand, layered with paint into which the photograph has been set, abraded back through the pentimenti, rubbed with graphite and pure pigments, and finally, waxed. Overall, the grid measures 8 feet high by 15 feet long. The pattern of sand dunes, the bend of a cactus, and the elegance of an abandoned hacienda are among the limitless details of the desert captured in these images. When assembled together, the images present an imposing testament to both the strength and the delicacy of this natural region.

Included in the gallery installation is Berman’s new work, Poieses, a photographic homage to the poetry of Norman Dubie. The word poises is derived from the ancient Greek verb “to make” and is the root of the English word “poetry”. The exhibition also features nine of Dubie’s poems reprinted by the artist in their entirety, by permission of the author.

A catalogue commemorating this exhibition will be designed by Twin Palms Publishers and published by Lannan Foundation later in 2008.

Art gives form to the things we know, but cannot yet understand. Its symbolic structure allows us to approach complex ideas that would be lost under the weight of analytical language. Art can serve as a kind of incubator for nascent truths as they evolve a coherent meaning. Art can also elicit and galvanize the support of a larger community for complex ideas. — Michael P. Berman

Michael P. Berman was awarded a Guggenheim Fellowship in 2008 for his work Grasslands: The Chihuahuan Desert Project. Photographs from this project will be published in 2009 in the book Trinity, by The University of Texas, Austin. Trinity is the third book of the border trilogy, The History of the Future, with the writer Charles Bowden.

Berman’s classically executed black and white photographs participate in and extend the tradition of western landscape photography. After completing a series of photographs he cuts up the negatives and prints and uses them as the basic medium for installations and paintings.

Michael Berman was born in New York City in 1956 and later came west to Colorado College, where he studied biology. He subsequently received an MFA in photography from Arizona State University. Fifteen years ago he settled in southwestern New Mexico, where he now lives in the Mimbres Valley near San Lorenzo.

He wanders the border wildlands of U.S. and Mexico and works on the local issues—mining, grazing, wilderness, timber, water, growth and the border—that impact the land. To his art Berman brings an awareness of the complexity of the biological world; to the political and social dialogue of the West he brings his art as a catalyst to renew and heighten our perception of the land.

His photographs are included in the collections of the Metropolitan Museum of Art, the Cleveland Museum of Art, the Amon Carter Museum, Lannan Foundation, and the New Mexico Museum of Art. He has received Painting Fellowships from the Arizona Commission on the Arts and the Wurlitzer Foundation and his installations and paintings have been reviewed in Art in America, and exhibited throughout the United States.