A Visit with Old Friends: Selections from the Lannan Collection 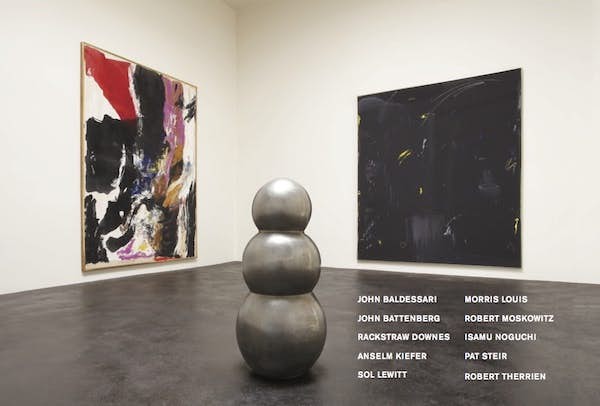 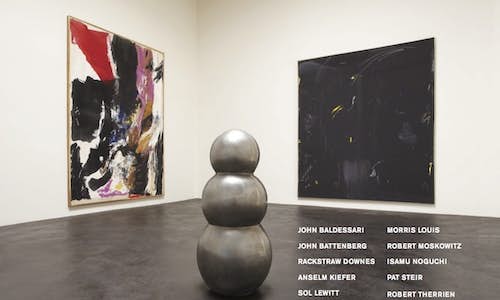 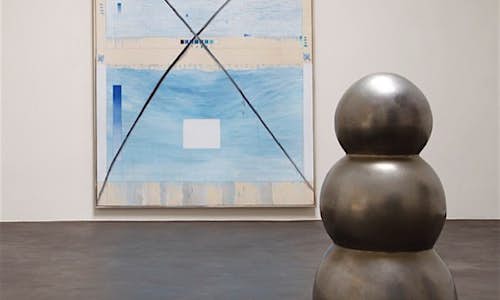 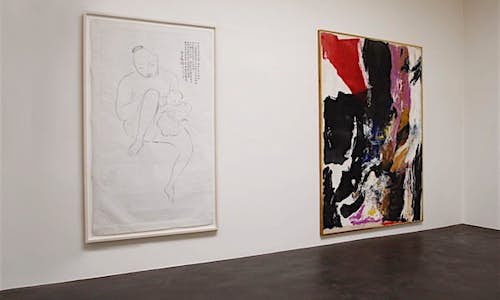 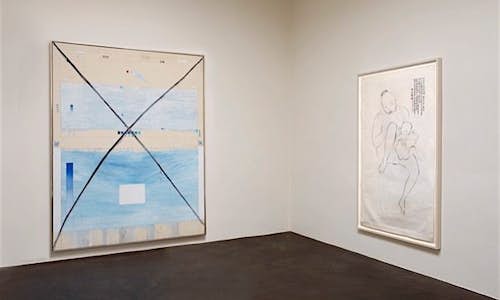 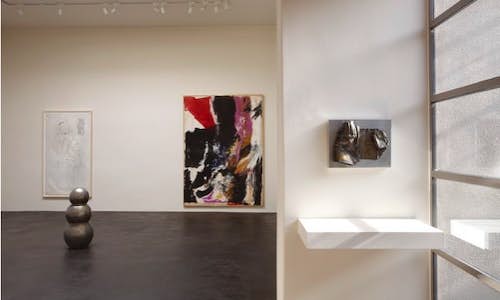 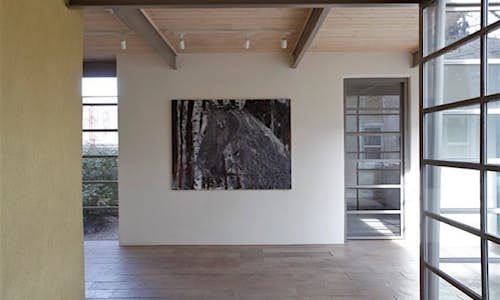 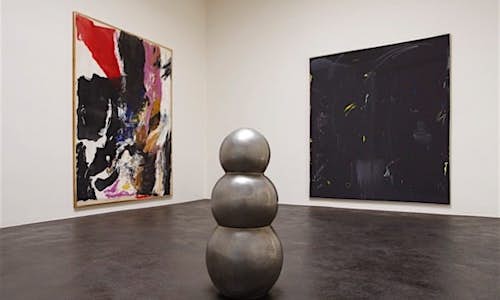 Spanning more than 50 years, A Visit with Old Friends is an intimate exhibit of artworks long loved in the Lannan Collection. The oldest piece in the exhibition is a large drawing by Isamu Noguchi from 1930, with text from 1938, created in response to war. Some of the artwork in the exhibition was gifted to the Foundation, a result of the generous support that our founder, J. Patrick Lannan Sr., bestowed on so many of the artists he knew in his lifetime. Like old friends, we welcome time with these artworks again and again.

From great China we once learned
the art of life.
now with western tools, apt
pupils, we torture the earth
that gave so much.
But China’s future is in her
children who growing into manhood
in times like these gain character
to love justice and resist
tyranny.

In 1930 Isamu Noguchi traveled on the Trans-Siberian Railroad toward Japan, where he hoped to reconcile with his estranged father. The 26-year-old stopped en route in Beijing, where he studied for eight months with celebrated Chinese brush-and-ink master Qi Baishi. During that period, Noguchi made many large ink-on-paper works, a few of which he entitled Mother and Child. Noguchi donated this version to an auction in New York in 1937 in support of the Chinese Women’s Relief Association for its charitable work in war-torn China.

The highest bid came from a wealthy Chinese businessman, K. C. Li, on the condition that Noguchi explain why he, a Japanese American, would choose to help the Chinese. Noguchi shared, “I give this drawing as my way of showing the world that not all Japanese are militaristic.” It was at this time that Noguchi added the poem in honor of China, directly on the artwork. Approximately 20 years later, Li made a gift of the work to J. Patrick Lannan Sr., who went on to collect several more Noguchi drawings and sculptures, establishing a friendship with the artist along the way. Of the many letters between the two, one to Noguchi from Lannan in 1983 reads, “I can say no one, of all the painters and sculptors I have met, match you in accomplishments. You are the Master, always and always.”

Also received as a gift, John Battenberg’s heavily textured sculpture A Swelling Is (1956) takes its name from a love letter featured in the center of the work, which begins, “Darling, I can’t tell you how much I miss you.” The cast-bronze work re-creates a scene from World War II, pairing the love letter with a pilot’s glove and a pack of Turkish blend cigarettes. The portion of the letter that is legible reads:

Darling
I can’t tell you how
Much I miss you
My nights are very
Lonesome without
. . . Giving you what
I can only give once
I want you to know
that I am not sorry
A swelling has grown
In my tummy that will
Keep us together

Perhaps most famously known for his Veil paintings, color field painter Morris Louis worked in series, often creating more than 100 works with a set motif and palette. Painted in 1954, the same year as the Veil paintings, this work exhibits a similarly unprimed canvas stained with color by paint, but with much bolder colors and with brushstrokes that move in a variety of directions. This and five other paintings were purchased directly from Louis in 1959. A Lannan family member recalls that all were unstretched canvases and that they initially lived under the bed in Patrick Lannan Sr.’s Park Avenue apartment.

Water, water, water, water . . . the word, written in pencil, is repeated 12 times across the center of Pat Steir’s The Virgin’s Dream (1972). Purchased in 1973, the stately painting marries a feeling of Jungian dream imagery and color with rational line and measurement. Created one year after Steir visited New Mexico to meet Agnes Martin, the canvas is covered by an enormous grid, like a giant piece of ledger paper. At the top of the painting we see a bird, a reference to the artist’s pet, John Cage (named in homage to the composer), also seen in other paintings from this period. Perhaps made as a final gesture, a huge black X covers the canvas, as if to cancel it out.

Also purchased in 1973 was Robert Moskowitz’s equally grand painting Untitled (1972). For 10 years, beginning in about 1967, every painting Moskowitz created was on this size canvas, an impressive 90 x 73 inches. In a letter from curator Ned Rifkin, dated December 9, 1988, he shares something about how the painting entered the Lannan Collection, writing, “Bob [Moskowitz] remembers Patrick [Lannan Sr.] coming to his studio with Mary McFadden and possibly Nancy Hoffman, who represented him at that time.”

The connection between Lannan and artist Sol LeWitt goes back several decades to when the Foundation first collected his work, a small sculpture, B 2-5-8(s) (1967), later gifted to the Museum of Contemporary Art, Los Angeles. In 1986 the Foundation commissioned a LeWitt wall drawing for its Lake Worth Museum. This pair of Sol LeWitt etchings was brought into the collection in 2005, and in typical LeWitt fashion, the title reveals the formula for its creation. Most recently, Lannan helped support the exhibition Converging Lines: Eva Hesse and Sol LeWitt at the Blanton Museum of Art at the University of Texas at Austin.

Along with plates, tables, and chairs, the snowman is an often-repeated figure in Robert Therrien’s work, a happy reminder of a favorite pastime for children in cold environs. Therrien has duplicated this familiar image in a multitude of media, from paint to plaster, and in a variety of metals, including bronze, zinc, silver, tin, and nickel. Discussing his most used images Therrien explained, “The third important shape is the snowman. It becomes a metaphor for myself or for a figurative image. It is the closest to a human figure, myself or a man. To me, it is the basic gesture for a figure. It has unlimited references. It fluctuates between the abstract and the real.” Lannan’s No Title (snowman), from 1987, was commissioned by the Foundation nearly 30 years ago to sit outside its first museum space in tropical Lake Worth, Florida.

After the death of the Foundation’s founder, J. Patrick Lannan Sr., his son Patrick Lannan assumed leadership and the museum was moved to a new home in Los Angeles, where an ambitious collecting program was begun. Purchased in 1992, Kiefer’s painting Der Ritt An Die Weichel (Ride to the Vistula), refers to Hitler’s march into Poland in 1939. The Vistula, Poland’s longest and largest river, is a feature in many of the country’s legends and has been one of its main trading arteries for hundreds of years. At the time of the German invasion, Poland’s only defense was its cavalry. A symbol used repeatedly in Kiefer’s work, the horse represents Poland, which was doomed trying to defend itself from modern tanks with gentle animals.

This piece was acquired a few years after the Foundation’s board of directors was introduced to Kiefer’s work and made a significant grant in support of his first US retrospective. Organized in 1988 by the Art Institute of Chicago and the Philadelphia Museum of Art, the show went on to travel to the Museum of Contemporary Art, Los Angeles, and the Museum of Modern Art, New York. In a review of the exhibition for Time, the late art critic Robert Hughes said that Kiefer’s work was “a victory for the moral imagination.”

John Baldessari’s X sign meets the ★ U.S. Mail ★ (1962), also purchased in 1992, is an example of the artist’s early experimentations with assemblage, which created an opportunity for him to move beyond the restrictions of a flat canvas. The work in Lannan’s collection, one of several pieces made at this time, is a rare surviving example, as most of his work made prior to 1966 was destroyed in a performance piece in which Baldessari and five of his friends burned all the paintings he had created between 1953 and 1966. The resulting Cremation Project was created from the ashes, which were baked into cookies and placed in an urn. A commemorative plaque listed the destroyed paintings’ birth and death dates, as well as a recipe for the cookies. Though this work differs in style greatly from the artist’s more well-known reductive conceptual work of the last few decades, the use of words is in keeping with his interest in language.

In the 1960s, Rackstraw Downes moved away from the abstract style popular at the time toward a more realistic, even superreal, interpretation of common sights, such as street scenes, banal interiors, and utilitarian landscapes. Often painting over a period of months or even years, Downes meticulously records the details of his chosen scene as perceived at a specific time of day. Rare for his plein-air method, Downes’s seemingly unremarkable scenes pull the viewer in optically through his use of altered perspective and multiple points of focus.

Of his experience painting the attic of the Snug Harbor Music Hall, Downes explained, “These were early nineteenth-century buildings with lovely brick arches and stone details, and shiny new twentieth-century ducts running through there. The contrast of tenses was very exciting to me.” The paintings were equally exciting to the Foundation’s current president, Patrick Lannan, when he first saw them on view at Betty Cunningham Gallery in New York at a solo exhibition in the fall of 2004. They were added to the Lannan Collection in 2005.