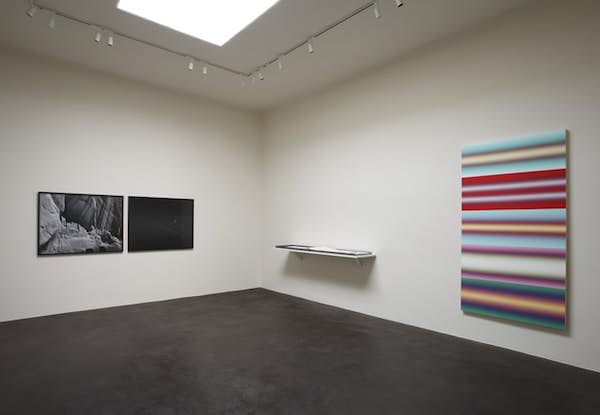 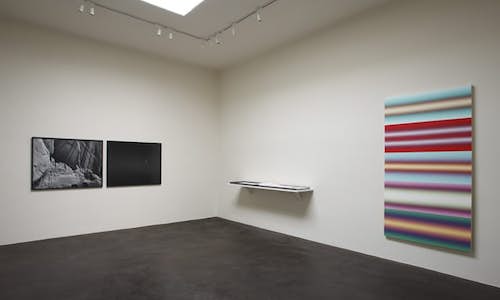 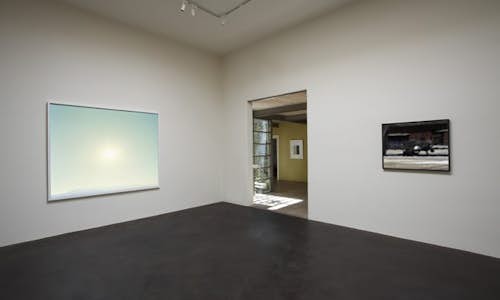 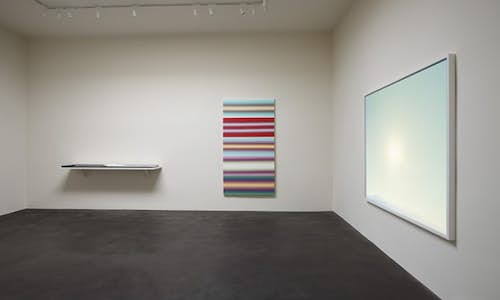 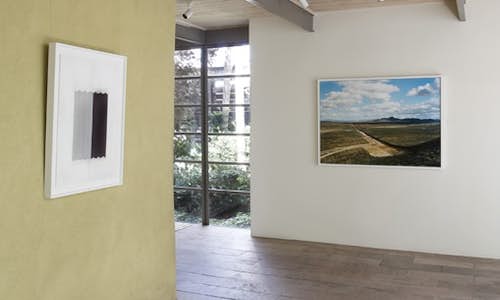 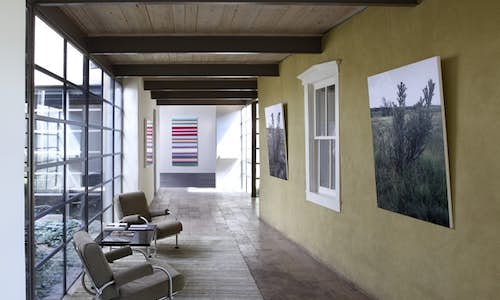 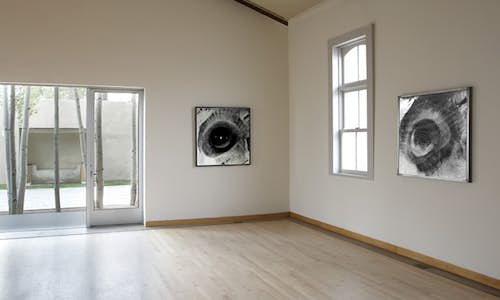 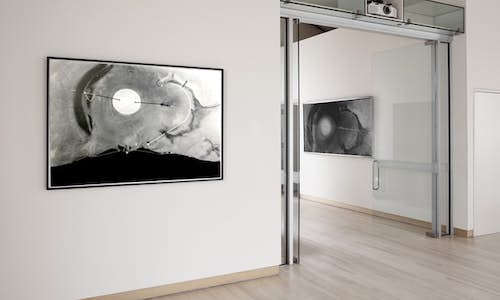 Desert Serenade presents painting, photography, mixed media and works on paper from the Lannan Collection. The subtitle: Drones, Fences, Cacti, Test Sites, Craters, and Serapes alludes to the subject or to a reference found in the artwork celebrating the beauty of deserts in North America and the often outrageous occurrences found there.

Photographer and environmental activist Subhankar Banerjee moved to Northern New Mexico in 2006, not long after completing a massive project in the Arctic National Wildlife Refuge in Alaska. Taking walks through the high desert landscape around his new home he was immediately struck with the vast numbers of dead piñon trees, a usually drought hardy slow-growing tree found commonly among juniper trees in the southwestern United States. Sustained years of drought had made the trees vulnerable to infestations by beetles, causing trees that were sometimes hundreds of years old to die.

During these walks Banerjee also took note of the cholla cactus in the landscape and was delighted to find this prickly plant often supports a bird’s nest. Of these images Banerjee wrote, “There is always a bird nest in the cholla, unless the cactus has fallen on the ground. What I see in these photographs is the simultaneous juxtaposition of being alive and being dead. From a distance, chollas always look half-dead, but as I get closer, they come alive. In harsh places like the Arctic and the desert, the gap between being alive and being dead seems rather small to me.”

Oaxaca, Mexico born and based painter Emi Winter was a resident at Chinati Foundation in Marfa, Texas in the early 2000s where she spent a substantial amount of time observing the light on Donald Judd’s aluminum boxes as well as the fluorescent light installations of Dan Flavin.

While in Marfa, Winter collaborated with master printer Robert Arber to create a series of prints inspired by the colors in Polaroid photographs she made of the Judd boxes. Winter made the paintings featured in this exhibition using the same techniques she employed while making the prints but this time using oil paint and rollers on panels. Of the near neon glow that emits from the paintings she explained, “I was attracted to the bright center of the lights (Dan Flavin) and the way they spilled color away from the center.”

When viewing the large painting Spoonbill, 2003 (named for the tropical bird the artist had seen in Mexico) one cannot help but think of a brightly colored Mexican serape or rug.

In connection with naming the work after birds in Mexico she states, “I’m often thinking of how to represent my experience as a dual citizen with a bicultural experience.” While this series was not specifically inspired by such weavings, the artist has subsequently made this connection. Having collaborated for the last five years with a weaver in a village outside of Oaxaca, Winter plans to present some of her rugs along side her paintings in an upcoming exhibition.

Several of the images Sambunaris made along the way feature portions of the daunting fence that lines the border, constructed by the U.S. Government to deter border crossings from our neighbors to the south. “Each location along the way gave insight to a rich history and culturally diverse population,” the artist explains. “Each person I encountered had a captivating story about their life on the border and how they arrived at this place.”

Her images remind us that this vast landscape has existed long before the governments that now control it and that both wildlife and humans have crossed this border regularly until the more recent impositions of physical and legal barriers.

The fences and barriers we create in our minds are the subject of the two paintings by Tom Miller included in Desert Serenade.

His use of layers of paint in these architectural paintings creates the effect of sculpture on a flat page. Of the work he has said, “I use forced perspective and symmetry in my work as a structural limitation and as a metaphor or analysis of the political condition.” Using shades of grey, black and white, the artist’s palette choice is meant to refer to notions of truth and specificity. Miller builds up the paint to create a physical barrier on the page describing the resulting image as, “constructed, ominous, precise and physical,” much like the effects of the actual fence pictured in Sambunaris’s photograph.

Trevor Paglen’s work looks to another manner in which the movements of humans are controlled, or at least scrutinized, by the United States Government through its use of secret drones and satellites with the desert often serving as a backdrop or launching point. The “classified universe,” as Paglen termed it, includes sites in New Mexico like Los Alamos and Jornada del Muerto as well as Las Vegas and Tonopah in Nevada.

Paglen’s Reaper Drone (Indian Springs, NV; Distance-2 miles), 2010, taken from two miles away, conveys a light aircraft with a sinister weight to it. Many of Paglen’s images in his drone series are of a beautiful sky with a speck that, to some, may appear as a flaw in the photograph. On making these images he said, “If you were driving through Nevada you would sometimes see them. I was thinking about the colonization and transformation of the sky as an aesthetic thing, but also a political thing.”

Paglen also turns his lens towards the heavens as seen in a diptych featured in the exhibition titled Artifacts (Anasazi Cliff Dwellings, Canyon de Chelly, Spacecraft in Perpetual Geosynchronous Orbit, 35,786 km Above Equator), 2010.

Of the piece Paglen explains, “On the left side of this diptych is an Anasazi cliff dwelling in modern day Arizona. The Anasazi, which is a Navajo word for “ancient ones” or “ancient enemies,” disappeared from the Southwest around 1100 C.E., many hundreds of years before the contemporary tribes moved to the area.

The photograph on the right shows a ring of geostationary and geosynchronous spacecraft hovering over the equator at a distance of 36,000km. At this altitude, atmospheric drag does not affect the spacecraft. That being the case, these spacecraft, many of which are no longer functioning, will remain in orbit in virtual perpetuity.”

Also in New Mexico, in the Jornada del Muerto desert (Spanish for Journey of the Dead Man) where Trevor Paglen has made work, lies White Sands, a combination missile range and National Monument. The location is perhaps most famously referred to in conjunction with Trinity, the code name for the first detonation of a nuclear weapon, occurring there on July 16, 1945. This park, surrounded by military installations, is a World Heritage Site where thousands of people visit annually to take in its majestic white expanse.

Renate Aller visited White Sands on Easter Sunday in 2012 and 2013, resulting in a body of work she calls Pascua. Images of families lounging, picnicking and walking all with a dramatic backdrop of pure white sands are punctuated with color as found in beach umbrellas and brightly colored clothing.

The White Sands images are made into diptychs by pairing them on the page with images from Aller’s earlier Oceanscapes-One View 1999 to present, featuring stunning Atlantic Ocean horizon views taken on Long Island at all times of the day and year. The combination can be confusing to the viewer, conveying two views from a beach scene when, in reality, one is the Atlantic Ocean and the other a desert in southern New Mexico. If one is unaware of the history of White Sands, the images portray an ease and innocence, while understanding the place’s role in the history of nuclear warfare and its on-going military weapons testing makes them even more sublime. Aller’s images from this series are presented in a unique vintage handbound book measuring 85 inches wide when opened.

Light and space artist James Turrell said, “My work is more about your seeing than it is about my seeing, although it is a product of my seeing. I’m also interested in the sense of presence of space; that is space where you feel a presence, almost an entity — that physical feeling and power that space can give.”

Turrell has spent a good portion of his career working on Roden Crater, an extinct volcanic cinder cone situated at 5,400 feet elevation and found in the San Francisco Volcanic Field in Arizona, not far from Flagstaff, the Painted Desert and the Grand Canyon. The artist has been working to transform the crater into a natural eye observatory for the past 40 years from his earliest conception of the project in 1974, to the purchase of the site in 1977, and the subsequent years of construction.

Drawing inspiration from ancient celestial viewing sites and ruins around the world Turrell explained, “I admire Borobudur, Angkor Wat, Pagan, Machu Picchu, the Mayan pyramids, the Egyptian pyramids, Herodium, Old Sarum, Newgrange and the Maes Howe. These places and structures have certainly influenced my thinking. These thoughts will find concurrence in Roden Crater.”

The mixed media pieces presented in the exhibition feature both celestial and terrestrial portraits of Roden Crater. Using a variety of media such as emulsion, mylar, beeswax, ink, liquitex and pastel, the crater is conceived somewhere between a blueprint and an imagined desert landscape.