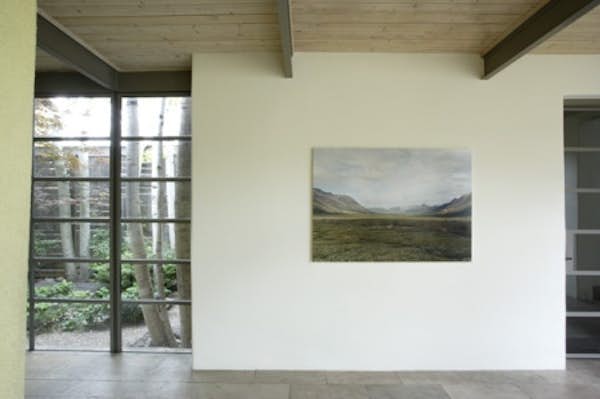 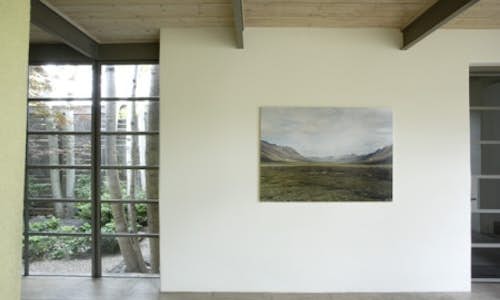 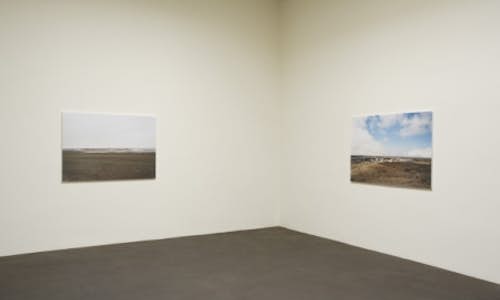 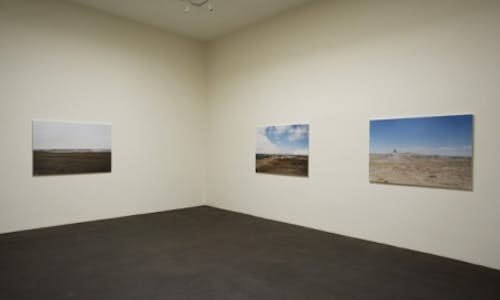 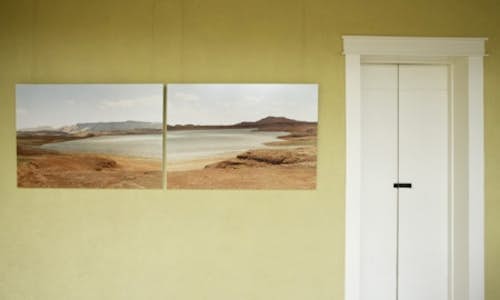 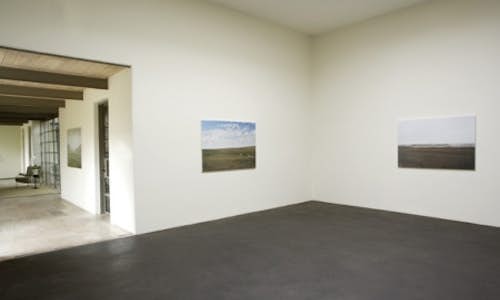 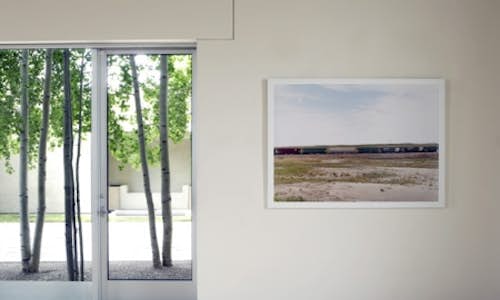 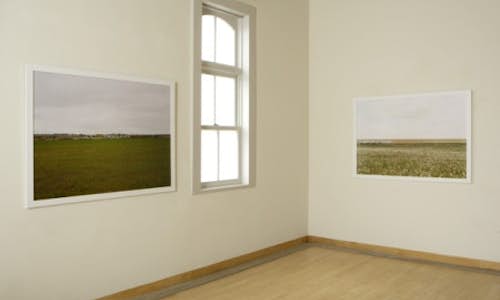 Overland, an exhibition of 14 large color photographs by Victoria Sambunaris from the Lannan Collection. Each year, for the last ten years, Victoria Sambunaris has set out from her home in New York to cross the United States by car, alone with her camera. Her photographs capture the expansive American landscape and the man-made and natural adaptations that intersect it.

The images celebrate the intersection of civilization, geology, and natural history, particular to the United States, featuring trains in Texas and Wyoming, trucks in New Jersey and Wisconsin, the oil pipeline in Alaska, uranium tailings in Utah, and a unique view of Arizona’s Petrified Forest. Combined, they present a sparse and vast landscape, dotted by human intervention, that is distinctly American.

For most of my photographic life, my interest has been the American landscape. I have journeyed extensively in my car throughout this country taking particular interest in the vast transformation of the landscape: the industrial parks of New Jersey; the border towns along the Rio Grande; the Salton Sea in California; the Petrified Forest in Arizona; the industry around Salt Lake, the mines of Nevada, the trains in Nebraska; I have journeyed to Alaska, venturing 500 miles on a gravel road, crossing the Arctic Circle, the Brooks Range to arrive in Prudhoe Bay; I have resided on an abandoned air force base on the salt flats of Utah looking out at the Enola Gay hangar; I have encircled the calderas of Hawaii mesmerized by the vast cavity upon the earth and penetrated the subterranean passages of the landscape to explore the delicate formations that make up our cave systems in the south. I have voyaged the I-80 corridor driving 11,000 miles striving to grasp the force of our geologic evolution and our place within it. My work in search of subject matter has taken me on seemingly every road, parkway, thruway, highway, freeway and turnpike between the coasts and beyond as I traverse the ever-changing American landscape. — Victoria Sambunaris

The title of the exhibition was inspired by 19th century geologist and explorer of the American West, John Wesley Powell and by the 1871 novel by J.W. Deforest, Overland, which begins “In those days, Santa Fé, New Mexico, was an undergrown, decrepit, out at-elbows ancient hidalgo of a town, with not a scintillation of prosperity or grandeur about it, except the name of capital.” Though the Deforest reference could be perceived as a gentle rib at Lannan’s home base, the artist takes particular satisfaction in the knowledge that a large body of her work resides in this Southwestern town.

Sambunaris’ images depict epic stories of geology, commerce, and emigration, all mixed with notions of Manifest Destiny. She explains, “I resist approaching a landscape strictly as an expanse of scenery but view it as an anomaly with an abundance of information to be discovered. Although I am captivated by the idea of how we inhabit our landscapes as we forge ahead in our development, my intent is to transcend political, ethical or environmental ideology and to allow viewers their own notions and meanings.”