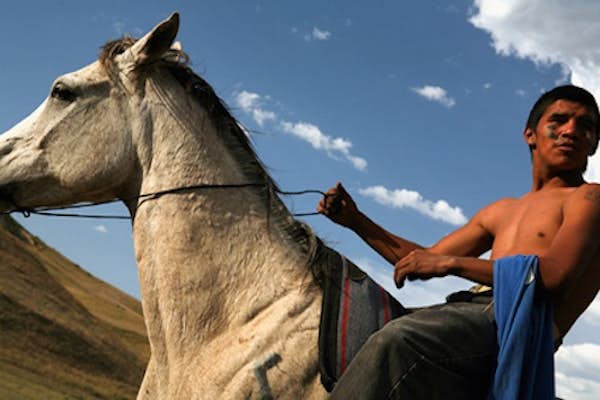 Radius Books received a grant in 2014 in support of a second publication of Aaron Huey: Mitakuye Oyasin.

Through his photographs in this powerful book, Huey portrays the broken social landscape and the ceremonial warrior culture of the Pine Ridge Indian Reservation. His work goes far beyond the obvious poverty and into the world of the tribe’s visions and dreams. According to Time, “Huey doesn’t consider this book cut-and-dry photojournalism. He didn’t approach every scene with the limitations that bind new photographers and he didn’t shy away from being asked to participate in situations, like a ceremony, that made him part of the spiritual renaissance he was photographing… Now, many call him their brother, uncle, friend.”

First published in the spring of 2013, the first edition sold out by the end of the year. The second edition, published in 2014, will reach a larger audience, and Radius Books will donate 500 copies to public libraries throughout the nation as well as grant the Lannan Foundation 100 copies to be distributed to contacts in our Indigenous Communities Program.