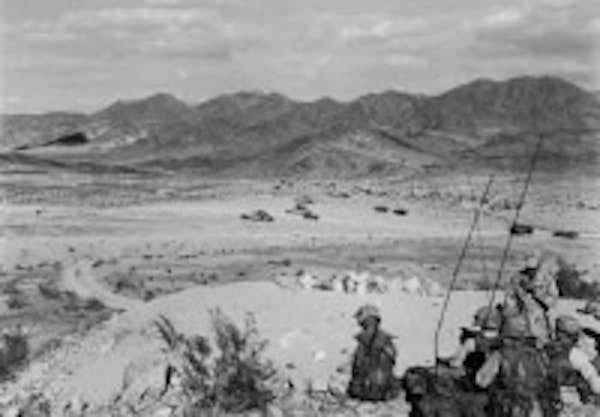 Though An-My Lê‘s petition to be an embedded photographer in Iraq was denied, in 2003 she was granted permission to photograph U.S. military training exercises in preparation for deployment to Afghanistan and Iraq. The series 29 Palms takes its name from the Marine base in southern California’s Mojave Desert where Lê photographed American soldiers both rehearsing their own roles and playing the parts of their adversaries. As seen in Stability Operations (Iraqi Police), their practice includes dressing as Iraqi police (complete with home-made armbands) and tagging former military housing with mock anti-American graffiti.

Lê works with a large-format camera to capture these images of staged war, in compositions that give equal weight to the landscape in which the theater occurs. Her equipment and working method are reminiscent of those employed by the Civil War photographers, though Lê‘s pictures address issues of war by looking at the preparation for combat instead of its aftermath. 29 Palms follows Lê‘s 1999 to 2002 Small Wars series, a study of Vietnam War reenactments in the United States. The exhibition features approximately 50 photographs from the artist’s Small Wars and 29 Palms series (on loan from the Lannan collection). This was a matching grant, representing 50% of the associated costs of loaning the exhibition. The Contemporary Arts Center in Cincinnati and the Boise Art Museum were added to the tour which included New York, Santa Fe, Chicago, San Francisco, Berlin, London, and Houston.

The Museum of Contemporary Photography received a grant in support of extending the tour and presenting their exhibition of the work of An-My Lê.