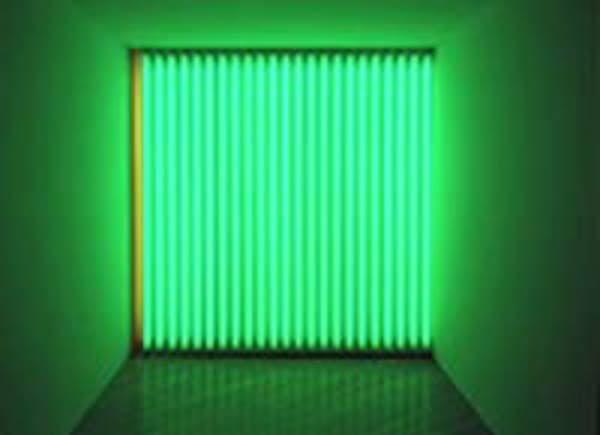 Dan Flavin’s career-long exploration of an art of light, situated outside the traditional mediums of painting and sculpture, established him as a progenitor and chief exponent of minimalism. Though Flavin (1933-1996) is one of the most important and influential artists of the late 20th century, this exhibition will be the first comprehensive retrospective of his work. It is the culmination of a major scholarly research effort, which includes the publication of the catalogue raisonné of Flavin’s “complete lights.”

The exhibition, on view October 3, 2004—January 9, 2005, will feature 44 works representing the artist’s use of fluorescent light. These range from the simple to the complex, including six large-scale installations that articulate architectural space. the show will include the artist’s early “icons,” his celebrated series of “monuments” to V. Tatlin, corner pieces, and works that take the form of corridors and free-standing “barriers.” Several galleries will be especially designed for installation pieces, which will demonstrate the expanding scale of Flavin’s work. In addition, sketches, drawings, and early collage-constructions will reveal the development of Flavin’s ideas and working process.

Support for the exhibition at the National Gallery and its accompanying catalogue was provided by Lannan Foundation.