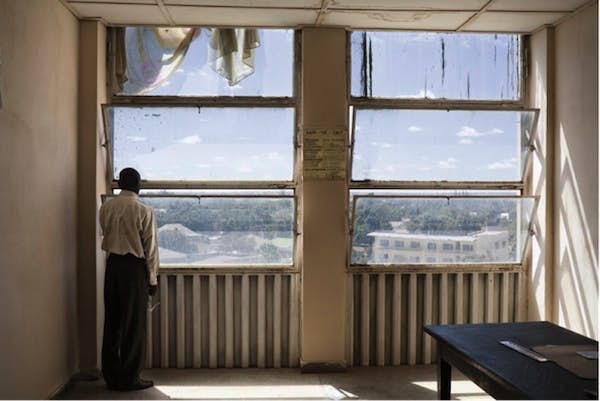 The Museum of Contemporary Photography (MoCP)  received a grant in support of touring the exhibition Guy Tillim: Avenue Patrice Lumumba to the Weisman Art Museum at the University of Minnesota, Minneapolis and to the Rubin Center at the University of Texas at El Paso. This series documents the architecture of colonial and post-colonial Africa, looking at the many city streets named after Patrice Lumumba, one of the first elected African leaders of modern times. Lumumba became the first Prime Minister of the Democratic Republic of Congo in 1960 after he helped his country gain independence from Belgium.

Tillim embarked on this project as the recipient of the first Robert Gardner Fellowship in Photography granted by the Peabody Museum at Harvard University. Through quiet photographs of decaying skyscrapers, empty streets, and watching people, Tillim addresses the lost idealism of the region with an approach that is both artistic and journalistic. Tillim comments, “Photojournalism tends to try and create drama. Tries to look for a false drama, tries to use, you know, photojournalistic iconography to create a sense of moment. I think that there is a movement away from that in photojournalism…because what you used to have were these quite inarticulate images that were seen to be so full of drama.”

This exhibition has toured widely in Europe in cities such as Rome, Paris, and Amsterdam and will tour in Canada and the United States through 2013.