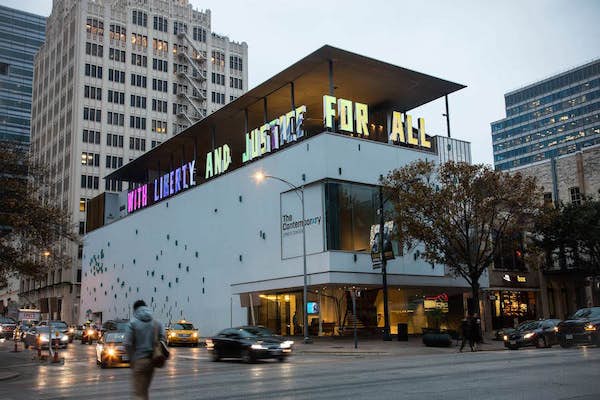 Jim Hodges: With Liberty and Justice for All (A Work in Progress) Installation

The Contemporary Austin received a grant in support of the installation of a monumental sculpture by Jim Hodges entitled With Liberty and Justice for All (A Work in Progress), 2014–2016, on view for three years commencing December 2016. The artist hopes that this outdoor text-based piece, a meditation on a familiar American phrase, will engage the public in contemplation and action for social justice.

Constructed of mirror-polished stainless steel, each letter stands 7 feet tall and weighs several hundred pounds. TCA raised the piece, which was originally constructed to stand on the ground, to its Moody Rooftop at the Jones Center and added lighting within so that the piece can be clearly viewed at night, oscillating between blues, purples, oranges, and pinks. Senior curator Heather Pesanti wrote, “The words themselves proclaim the fraught but aspirational tenet of this country’s Pledge of Allegiance, one that has complicated roots in religion and patriotism and that has so often been misused and denied, yet embodies an eternal and ongoing ideal (a ‘work in progress’).”

Partnering with the LBJ Presidential Library and the University of Texas, The Contemporary Austin offers many levels of engaging the public with the work, including community art lessons, lectures, public forums, school tours, and spreading the phrase to bus wraps, bus stops, T-shirts, temporary tattoos, screen savers, and a Web application in both English and Spanish.