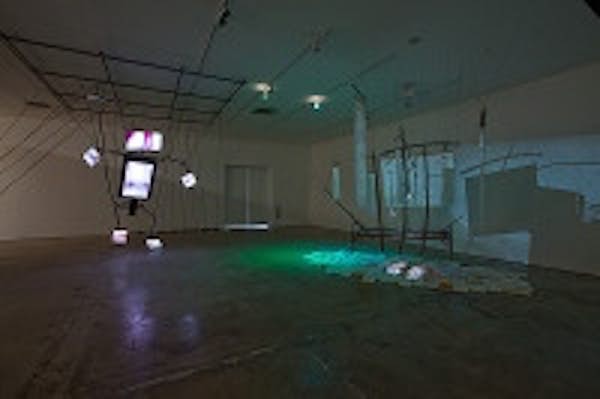 Artist, playwright, and musician Terry Allen examines an episode in the life of the similarly polymathic artist, Antonin Artaud. Throughout his life, Artaud suffered a number of psychological crises, resulting in his repeated and lengthy institutionalization. In 1937, Artaud went to Ireland to return to the Irish people what he believed was the staff of St. George. He was involved in an altercation with the Dublin police and was subsequently deported. Because of his deteriorating psychological state, he was chained to a cot in the hull of the ship Washington for the seventeen-day journey back to France. This journey serves as the inspiration for Allen’s Ghost Ship Rodez. Taking its title from the French mental institution “Rodez,” where Artaud spent a number of years after his deportation from Ireland, this exhibition consists of room-sized multimedia works blending sculpture and video. A portion of the exhibition invokes the physical environment of the Washington. Another will include a larger-than-life-size figure that refers to Artaud and the “Daughter of the Heart to be Born,” an archetype representing all the women in Artaud’s life. Although these works allude to the physical realities of Artaud’s life, their video components explore Artaud’s mindscape, giving form to psychological space. Allen invites us to take a journey into the depths of Artaud’s mind as he sees it.

SITE Santa Fe received support for the exhibition Terry Allen: Ghost Ship Rodez on view in Santa Fe from February 4 through May 9, 2010.