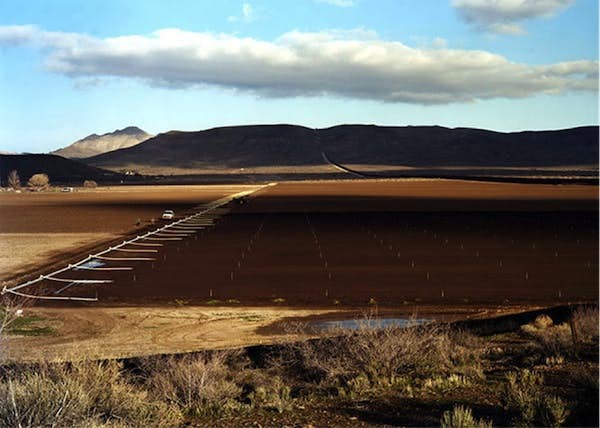 The Museum of Contemporary Photography in Chicago received support for the exhibition Victoria Sambunaris: Taxonomy of a Landscape on view from January 11 to March 31, 2013. For more than a decade, Sambunaris has set out on the highway alone, for months at a time, to photograph the United States, describing her motivation as “an unrelenting curiosity of wanting to understand the American landscape and where we are in it.” During her travels she has spoken with truckers, miners, hunters, ranchers, geologists, park rangers, campers and fellow explorers.

For most of my photographic life, my interest has been the American landscape. I have journeyed extensively in my car throughout this country taking particular interest in the vast transformation of the landscape: the industrial parks of New Jersey; the border towns along the Rio Grande; the Salton Sea in California; the Petrified Forest in Arizona; the industry around Salt Lake, the mines of Nevada, the trains in Nebraska; I have journeyed to Alaska, venturing 500 miles on a gravel road, crossing the Arctic Circle, the Brooks Range to arrive in Prudhoe Bay; I have resided on an abandoned air force base on the salt flats of Utah looking out at the Enola Gay hangar; I have encircled the calderas of Hawaii mesmerized by the vast cavity upon the earth and penetrated the subterranean passages of the landscape to explore the delicate formations that make up our cave systems in the south. I have voyaged the I-80 corridor driving 11,000 miles striving to grasp the force of our geologic evolution and our place within it…

This ten-year survey of Sambunaris’ work features over 30 photographs from the Lannan Collection. Also presented is the artist’s extensive ephemera collection of geographical books, maps, rocks, and mementos from the road, as well as a 30-minute video montage of footage recorded by Sambunaris in the field. The exhibition Taxonomy was curated by Lannan’s Christie Mazuera Davis and Holly E. Hughes, Curator for the Collection at the Albright-Knox Art Gallery in Buffalo, New York, where it was first presented in late 2010.